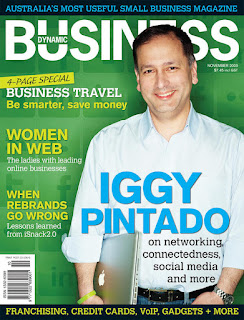 Last month, Jen Bishop, the former editor of Dynamic Business magazine, Australia's largest subscription magazine for small business sent a tweet on Twitter asking people who they would most like to see featured in their November issue. She contacted me shortly afterwards and we met for a coffee meeting interview.

This month, I'm not only featured in an article in the magazine, I also made the front cover.

Aside from being humbled by the honour, profile and exposure, in my mind it's also resulted in three great outcomes for social media and business:

1. Social Media is for business. This is the first time a player in the social media space has appeared on the front cover of a mainstream business magazine in Australia. This highlights that social media has arrived as a legitimate business platform for business owners and managers to consider and leverage.

2. Social Media Experts vs. Practioners. To represent social media for business, the magazine didn't pick a self-proclaimed social media "expert or guru" i.e. some who claim to know social media yet rarely tweet or last accessed their Linkedin account eighteen months ago. The fact is that Dynamic Business chose a social media practitioner - someone who regularly uses social media personally and commercially to collaborate, participate and connect with people and communities, in a disciplined manner.

3. Traditional and Social Media can co-exist. Much has been said about the potential demise of print and broadcast media with the rise of "new" media. With forward thinking editors like Jen Bishop leading the way, there is a place for both mediums if leveraged 'inline' with media consumption behaviour and preferences. I'm pleased to be working with Jen to use this magazine issue as an experiment on print and social media coexistence as she details in her recent blog post.

Kudos to Jen and her team for having the vision to realise that social media is relevant, practical and good - for business.

What do you think? Would appreciate any thoughts and comments on this post.

Posted via email from iggypintado's posterous