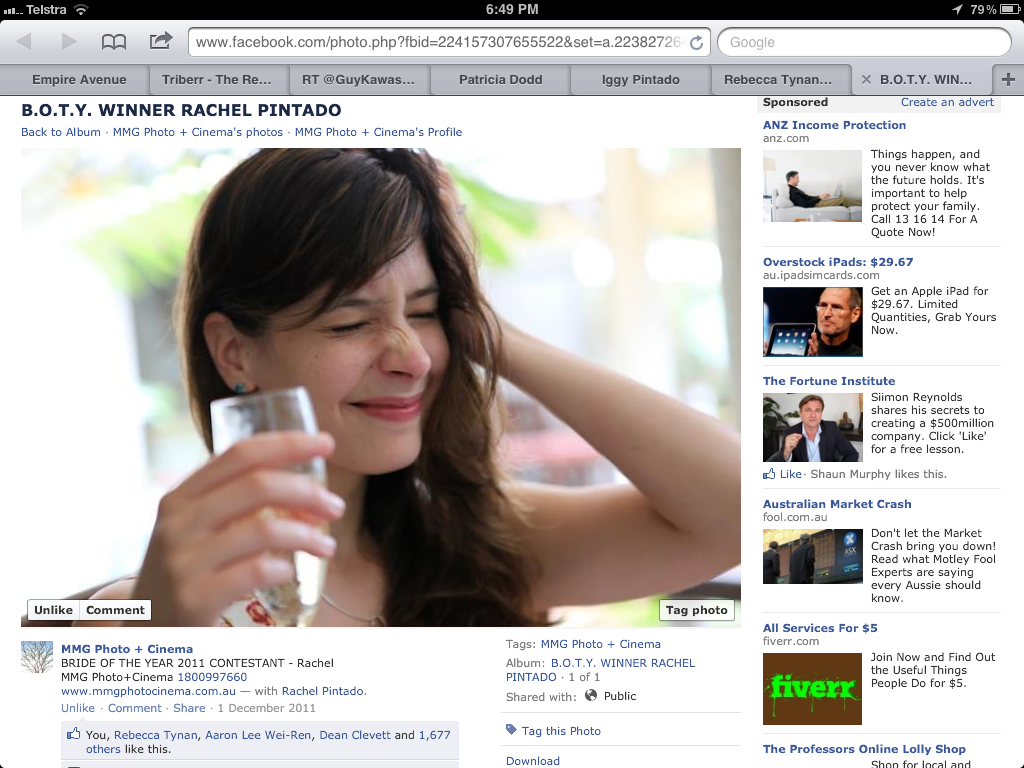 In December last year, my daughter Rachel asked for my help to win a Bride of the Year Facebook contest that required entrants to have their particular picture LIKED on the contest page. As a connector who often gets asked what possible benefit there is in having so many Facebook friends (currently 4,500), Twitter followers (currently 36,000) and Linkedin connections (currently 26,000), I took on the challenge to apply my marketing experience to prove that if utilised effectively, you can derive a benefit from connecting a social community - for the win (FTW).


As you can see from the picture, Rachel won the contest. Her winning picture generated 1,657 likes, taking out the grand prize of an all expenses paid trip to Australia's Hamilton Island for two. She won as a result of a carefully managed marketing campaign that connected individuals in various social communities to take an action that resulted in her win. This isn't the story of the campaign - a good cook doesn't reveal his full recipe. It does provide some tips as to how to connect social communities to achieve a desired result which I hope you find useful!

1. Understand the RULES and OUTCOMES.


The contest rules as defined by MMG Photo + Cinema were very clear: Eligible brides were asked to post a photo on their Facebook contest page. Whoever got more recorded "likes" than all other entrants legitimately by midnight 31st December 2011 would be the winner. The marketing challenge was to get more likes on Rachel's picture than all other 45+ competitive contestant brides in 4 short weeks in December, ensuring her picture was in a winning position a few hours before the contest close time.


The RULES were very clear. The OUTCOME was simple: She had to win.

2. Consult the PRACTITIONERS (People in the KNOW, not necessarily the "experts)


As much as you think you might know about social media and communities (myself included), I asked for the advice of some the smartest people who plan, play and experiment in social media. I'm not talking about the people who talk the theory. I'm referring to the people who practice what they preach - daily. I got some great advice and support from Mahei Foliaki, Michael Todd, Keith Keller and Annalisa Holmes. These folks are in the social game every day and provided reality checks that I was grateful to be able to cash.


The people who want to assist you directly are usually those close to you - family and good friends - so start compiling that list first. Next are people you relate to regularly - work colleagues and good acquaintances - they may not 'know' you well but they may be willing to take an easy action such as liking a Facebook photo due to your connection. Thirdly, there are interest groups who you have some connection with - school, church, university, clubs, etc - again, if the request is simple and easy, they're likely to support.


Finally, always apply network theory by asking every simple person to SHARE the request with their own connections at the same time you ask them to take an action. If the action is simple, they'll be more willing to ask their friends to maximise the reach of the request.


The easier the better. The request sent to various individuals and groups was to LIKE Rachel's posted competition picture. The first step was to click on a link to the photo and once there, to click LIKE on her photo - easy as. To make it easier, the request was usually done on Facebook, the platform they were already on. I found it harder to post as links on other social platforms like Twitter, Google+ and Linkedin as they had to switch what they were doing. However, it didn't stop us posting there too!


I sent a direct Facebook message to many of my Facebook connections as did Rachel. I messaged around 20 connections at a time and sometimes a few more, using their first names in every case. I preferred Facebook messages as it was more personal and direct. Those who chose to opt-out by leaving the message conversation made it easier to send follow-ups to later and prevent potential accusations of spamming. The message was simple and included a direct link:
I was ably supported by the communities of supporters like Tessa Gutierez, Mark Simmering and 124 others who shared my message as a Facebook post.


6. Monitor performance along the way.


I monitored Rachel's progress daily from day one and hourly in the last 24 hours. When the LIKE rate started to slow down, I would send a mix of follow-up messages and interest group posts to get it moving again. As the contest was open to people in other countries, I sent messages to connections in their time zones to maximise their views of the messages. Also, it was important to avoid holiday dates like Christmas and Boxing Day as there was minimal social activity during these times.


In doing so, Rachel jumped from 31st place in the first week of the contest to 9th place by the start of the third week. She was in the top 5 with a week to go and hit the lead two days before the contest end time.

7. Get ready for plot twists.


The contest organisers were also clear that they could change the rules along the way. With two weeks to go, they culled the number of contestants to the top 10. In another twist, they allowed 35+ brides who didn't make the final cut to allocate their LIKES to anyone in the top 10. Fortunately, Rachel was always pleasant and friendly with all the contestants throughout. It helped that she LIKED all the other contestants pictures and added them as friends on Facebook prior to their elimination. The plan now called for a closer monitoring of LIKE allocations by the other contestants and the real possibility of having to get more LIKES than planned.

8. Keep an eye on the competition (but don't let it obsess you)


Due to the plot twist, closer monitoring of the final 10 competitors was required. In week three, I started a simple spreadsheet recording LIKES every few hours by finalists PLUS allocations from the other 35+ brides. By tracking performance, you could assess what tactics they were using via comments left on their posts.

9. Stay awake until the very end.


The contest deadline was midnight on 31st December 2011, New Years Eve. Although there was little one could do if there were any massive LIKES or LIKE allocations made in the last few hours, there were some tactics planned as contingencies just in case. It's a little like watching final bidding on an eBay item - you must watch until the very end.


The day after she won the contest (New Years Day), I personally messaged all the people I knew who LIKED her photo. I posted my thanks on all my social platforms to maximise the message. I re-posted her thank you picture at the top of this post. So many people were grateful for the thanks and delighted by the part they played in being part of the success.


So again, I'd like to thank EVERY ONE of the 1,657 people who took the time to be part of Rachel's success and for validating that you can connect social communities for benefit.


Posted via email from iggypintado's posterous
Posted by Iggy Pintado at 9:56 PM