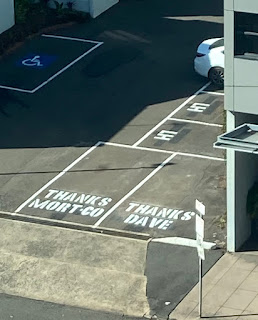 I am a firm believer in personalisation as an effective and impactful way of connecting to someone, either informally or formally.It’s why many people still write and send personalised greeting cards for birthdays, weddings, christenings, anniversaries, etc. It’s why some people make direct phone calls to their connections instead of leaving the less formal voicemail or text message. It’s why some people prefer face-to-face meetings and visits to friends and relatives instead of jumping on Zoom or FaceTime video call.Some even try to simulate personalising engagements. It's been used by many organisations in mass emails as a tool to address the attended recipient by name to make it “ look “ like they know them, when really, they don’t.I recently discovered a novel personalisation approach on a recent visit to the rural town of Toowoomba in the state of Queensland in Australia. Looking outside the window on the sixth floor of the Quest Hotel on Margaret Street, I spotted this novel parking space with the words “Thanks Dave” painted on it.

I have no idea who Dave is. A part of me thinks it's a prank played or a sarcastic statement as it's not the best carpark in the lot.

But the positive side of me makes me think that the verbal presence of his name at the location was celebrated not only with his own car parking space but also that he was personally ingratiated every time he happened to visit.

I'd like to think that if Dave was a customer, he would certainly always come back. If he was a senior manager, he’s revered by his staff and if he was an employee, Dave would feel special every day he attends the office.So what do you think? Sarcasm or gratefulness?

Either way, thanks Dave for adding to an appreciation of personalisation!

Posted by Iggy Pintado at 7:11 PM No comments: