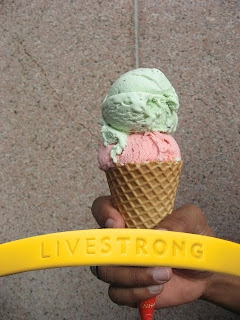 I'd been intrigued for some time by the musings of someone I follow on Twitter. This person predominantly tweets positive and inspiring messages. A sample of these tweets encourages "Random Acts of Kindness" (#RAOK), promotes concepts such as "unconditional love" and includes the most thought-provoking qoutes from Plato, Gandhi and the Dalai Lama, to name a few.

On Twitter, he identifies himself as @iconic88 and is currently visually represented with an avatar of a hand holding up a single ice cream cone. He chooses to stay anonymous - like Superman's Clark Kent. His Twitter presence does not reveal his identity yet creates a positive tone and sense of hope in a world that needs it badly.

I met @iconic88 at a business networking function a few weeks ago and had the privilege of "connecting" with him over a cup of coffee recently.

During our discussion, he related his personal experiences in locations around the world where he saw the best and the worst of the human condition and behaviour. While most would be despondent about these desperate situations, his conclusion - and attitude - is that much can be resolved with hope, positivity, gratitude and love, in communities - starting with individuals.

In a world that revels in negative criticism and judgment of others, I look forward to a daily dose of inspiring tweets by the "super" man that is @iconic88. I suggest you do too.

What do you think of @iconic88? Please leave a comment.

@iconic88 is an inspiration and always worthy of a retweet. In life and on Twitter (which is life-like but on Twitter everyone seems to be on their best behavior) there are those who concentrate on the day-to-day, their businesses, their lives...and there are those who have their eyes on the prize. That's @iconic88 - looking outward, upward, giving thanks, redirecting energies, offering a positive spin, and making me think twice--maybe even three times.

We all know there is trouble in the world. The only rational response to this is to try harder, to be better and to spread more kindness and goodness in hopes that the human condition will be lifted up...one person at a time or in the case of @iconic88, one tweet at a time.