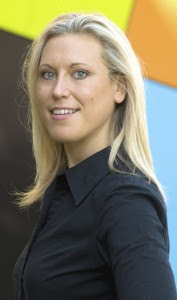 With millions of people on Twitter and lots of people tweeting at the same time, it's a challenge to get heard above all the tweet traffic. So how do you be - and "behave" - different on Twitter to get noticed?
One person who does it really well is Sam Mutimer (@sammutimer). I met Sam via Twitter and was quickly enticed to her tweets by what I've dubbed "Mutimerisms".
Her tweets reflect her genuineness and gregarious personality to the extent that they're 'out there' enough to keep you engaged yet compelling enough to keep you following.
Despite being English, most of the phrases she uses don't appear in any formal English grammar book I know of. But after a while of following her, you quickly get mesmerised by a combination of bewilderment and curiosity as you work through the logic of her language and her messages. In the end, you stay tuned and connected because - she's different - and that's her appeal.
Here are my Top 10 "Mutimerisms":
Posted by Iggy Pintado at 11:05 PM

compliments of Bradley Klibansky
"yayez" - wolf whistle on facebook
"its a joke" - its awesome
"loose" - chilledwith ++ to drink
"loose as a wizards sleeve".... resulting in being
"wizarded"

Actually you both rock wth great motivation and insghts.