The car of the future has an extension cord and a great big laptop battery. 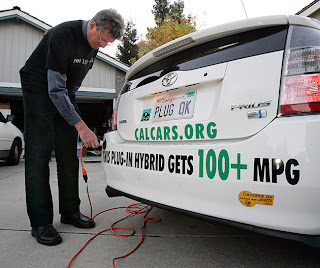 ABOUT CONNECTING TO ... CARS

The next evolution of the automobile will be plug-in hybrids that get their juice from a household electrical outlet. They'll start rolling into showrooms within in 18 months. Experts say plug-in hybrids could account for about 20 percent of vehicle sales within a decade -- and half of all sales by 2050.
"It all boils down to the three ways electricity is better than gasoline," says Felix Kramer of Cal Cars, a plug-in advocacy group. "It's cleaner, it's cheaper and it's domestic."
Advocates say plug-in hybrids are the best chance to address global warming and wean the nation from oil. Consumers remain unsure about electric vehicles. Ethanol's a shaky proposition because of the food-for-fuel debate. And it'll be decades before hydrogen is a viable option. That, advocates say, leaves plug-ins as the best option.

"The discussion is no longer one of 'if,' but of 'when' and 'how,'" says Chelsea Sexton, executive director of the advocacy group Plug-In America. "This has moved beyond the grass-roots level into the policy and business arenas."
It all starts in 2010. General Motors promises to have the Chevrolet Volt rolling into showrooms by then. Toyota says it will roll out a small fleet of plug-in Prius hybrids to see how they do. Volkswagen has similar plans for its plug-in Golf. And Fisker hopes to have a few dozen pricey Karma sedans in driveways within 18 months. Ford and others are moving more slowly, aiming for 2012 and beyond.
Automakers know plug-in hybrids are their best shot at meeting tightening federal fuel-economy regulations. They're also responding to a seismic change in the market as record-high gas prices have consumers, fed-up with paying through the nose for gasoline, joining environmentalists to demand fuel-efficient cars.

The Department of Energy has handed out more than $60 million since 2006 to advance hybrid and battery technology and hopes to disburse another $62.3 million by the end of next year.
Both Barack Obama and John McCain have hailed plug-in hybrids in general -- and the Volt in particular -- in recent weeks and promised to spur development of such cars if elected.
"We have the plug," he says. "The cars are coming. All we need is the cord."
Posted by Iggy Pintado at 10:42 PM