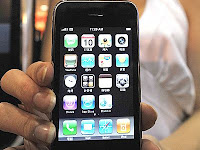 ABOUT TECHNOLOGY ADOPTION AND CONNECTING
According to ninemsn.com, despite activation and configuration problems which frustrated users, Apple sold more than one million iPhone 3G mobile phones on the launch weekend from Friday, 10th to Sunday 13th July, 2008, according to the company.
The phone went on sale in 21 countries - Australia, Austria, Belgium, Canada, Denmark, Finland, Germany, Hong Kong, Ireland, Italy, Japan, Mexico, Netherlands, New Zealand, Norway, Portugal, Spain, Sweden, Switzerland, Britain and the US - on Friday 10th July and will go on sale in France on Thursday 17th July.
"iPhone 3G had a stunning opening weekend," said Steve Jobs, Apple's chief executive. "It took 74 days to sell the first one million original iPhones, so the new iPhone 3G is clearly off to a great start around the world."
Glitches caused when an Apple server designed to let users activate their gadgets
crashed under the load of existing iPhone owners trying to upgrade to new software that was released at the launch of the iPhone 3G. Most of the glitches appeared to have been solved by Monday morning, but the problem was a severe embarrassment for Apple that prides itself on maximising ease of use for its customers.
The new iPhone 3G updates the previous iPhone with much faster connection speeds and built-in GPS, but many analysts believe the most significant update is the new software that allows users access to thousands of applications developed by third parties and available through Apple's online store.
Posted by Iggy Pintado at 10:36 AM

The iPhone appeals to my needs and requirements to carry as little weight on my shoulder as possible.

Women usually do not have pockets as their usual attire. Women instead use handbags as the same function as men do with pockets in their attire.

Hence the need for a compact gadget that does everything. The iPhone has the ability to carry out the necessary tasks for me.

That is, I can listen to university lectures, answer the phone and e-mail in the one device. There is no need to carry a MP-3 player, camera, handheld GPS, PDA and mobile phone.

If you carry around all these items in the one handbag your shoulder may end up with injuries from excess weight.

Maybe this is why many people, and perhaps women especially, have flocked to the Apple stores or official online sites to purchase these devices.

I think there should be a study on this phenomenom to understand why the iPhone is very popular other than the "tech-heads" that absolutley love gadgets no matter the practicality of them.